Every day more than 500 people are reported missing in the UK, and although most are found within 72 hours, thousands every year are never seen again. BBC Radio Five Live’s Report follows the story of Hampshire teenager, Daniel Nolan, who vanished after a late night fishing trip six months ago. By James Silver 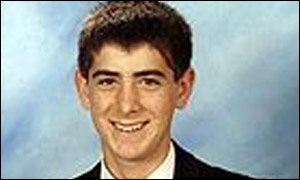 Pauline Nolan is securing a new batch of posters of her missing 15-year-old son, Daniel, to lampposts, trees and bus stops along a busy main road on the outskirts of the Hampshire village of Hamble.“We have not got any motivation in life any more,” she tells me. “My whole spirit has just gone, you are completely empty.”

When she refers to Daniel, it is always in the present tense.”He is such a good boy. He is as is near as you can get to a perfect teenager.”

She tears down a faded poster and replaces it with a new one.

“I never dreamt we would get six months down the line and still not know what has happened to him.”

Family friend Pippa is putting posters up on the other side of the road.

“One of the things that has upset us is the police have assumed from the outset that he drowned,” she says.

“In fact, until we know otherwise, he is missing. Simple as that.”

It was 1 January when Daniel Nolan set off, as he had done so many times before, for a late-night fishing trip with his friends.

Hamble is a picturesque, yachting village. Dozens of sailing boats are moored in its quay.

The boys, who had been fishing off a pontoon, were due to pack up and return home at 2am.With no sign of her son at 2.45am Pauline was starting to panic.

She got dressed and went down to the quay.

“I found Daniel’s fishing equipment down there,” she recalls with a shudder, “but no Dan.

“I had a sixth sense that something was wrong, because he is always home on time.

“Then I came home and called the police. It was like pushing a button. By 4.30am all the emergency services were out on the water.”

Daniel was last seen by witnesses at 23.40pm outside the Victory pub in Hamble, where he parted company with his friends.

As they headed home, he went back down the winding lane towards the quay to collect his fishing gear.

In a few hundred yards, somewhere between the Victory and the edge of the pontoon, he vanished.

Six months later, Pauline takes me onto the pontoon where her son and his friends had fished that night.

“You can see there are dozens of yachts around here, lots of obstructions,” she explains.

“We have now had five diving teams searching for Daniel in case he got trapped, two large commercial and army sonar units have patrolled the river and specialist sniffer dogs who can detect decomposing flesh from the surface, but they found nothing.

“Not even an item of clothing.”

Three weeks into the police investigation, Pauline and her husband Greg – desperate for leads – approached a private investigator.Peter Bascombe is a former Hampshire police detective who knows the area well.

“When someone goes missing you have to eliminate three possibilities,” he tells me.

“Did he drown? Has there been foul play, including abduction? Did he walk off of his own accord?”

He thinks the police jumped too soon to the conclusion Daniel drowned without ruling out the other options first.

“The first few weeks of their inquiry I think were shoddy,” he says.

“They do not appear to have carried out what I would term as normal standard inquiry practice.”Detective Superintendent Andy Stewart of Hampshire police, who is leading the inquiry, flatly rejects the criticism.

“I am aware that there has been a perception we always only believed Daniel was in the water,” he says.

“That is not the case. We looked at all the possibilities from the early days.”

Mr Bascombe says his hunch is Daniel has been abducted, but he has no evidence.

“We have got nothing,” he admits. “All the usefully-placed CCTV cameras in Hamble were either switched off or broken that night.

“We cannot link it to any particular person, there is no one we can put under surveillance.”

Daniel is 5 ft 7 inches tall. He is of medium build with brown eyes and short dark hair.

When last seen he was wearing a beige jacket, a red fleece, a grey woolly hat and dark blue rip-curl trousers.

The Five Live Report: Missing was presented by James Silver on Sunday.

Tragically, Daniel’s death was confirmed in 2003.
This article was first published on the BBC News Website.
© James Silver 2017